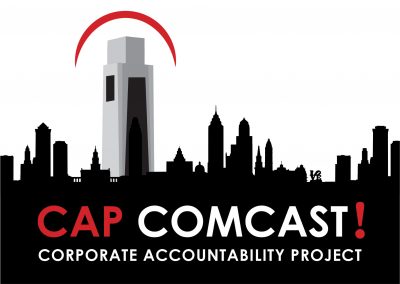 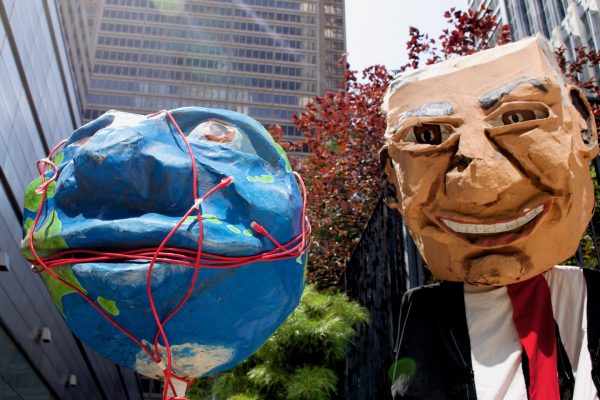 Between 2014 and 2016 the CAP (Corporate Accountability Project) Comcast campaign focused on securing a variety of demands from the Comcast Corporation as it negotiated a franchise agreement with its hometown of Philadelphia, PA. Comcast’s franchise agreement, set for and renegotiated every 15 years, gives the company permission to use public “right-of-way” to operate its cable system and deliver cable service.

Thanks to the work of Media Mobilizing Project, in collaboration with a broad coalition of activists, residents, policymakers, media producers, and public sector workers, we negotiated a franchise renewal agreement that delivered unprecedented benefits to the city of Philadelphia. Fundamentally, the CAP Comcast campaign was central to ensuring that the franchise agreement expanded affordable and free Internet access, increased customer service commitments, and provided more substantive protections for cable and Internet workers, among other benefits.

More and more individuals, communities, and organizations are signing on every day to hold Comcast accountable to Philadelphia. Signing on to the CAP! Comcast campaign does not mean you necessarily endorse all the demands below. But CAP! Comcast organizers and allies see the vision below as a starting place for the City and our communities as we work to get a fair franchise in Philadelphia.

According to data collected by the New America Foundation, in Los Angeles, the cheapest monthly television, phone and Internet service costs about $80. In Paris, a similar bundle sells for $32, and in Seoul, it goes for $15. On Comcast’s website, the price advertised for a similar bundle is also about $80. In exchange for renewing a franchise, the City should demand that Comcast freeze its cable, broadband, and phone rates, while increasing speed, service, and access to all Philadelphians, for at least five years while the City and community members can evaluate fair rates and services for our city.

The local access channels and programming, which Comcast is obligated to fund as part of its franchise agreement, were a big piece of what communities won last franchise. These are vital community resources that Comcast has fought and underfunded. PhillyCAM, the City’s public access TV station, operates a community access media center that unites people to make and share media for creative expression, democratic values, and civic participation. Comcast should not discriminate against local Access Channels with respect to the functionality and signal quality of those channels as compared to those of the local broadcast digital format channels carried on the cable system. This includes transmission of local access channels in HD and making public access content available On Demand.

Almost 1/3 of Philly residents are offline, primarily the poorest. And the Internet Essentials program hasn’t met the needs of most Philadelphians, being a limited program that’s difficult to sign up for, reaching not enough people who are offline.

Comcast should create a publically-overseen fund to provide more free and affordable internet access for poor communities and underfunded schools. That could support students to learn and workers to seek jobs.

Comcast’s top executive salaries alone could pay off the school district’s three hundred million dollar budget deficit in a few years. The company took in over $64 billion in 2013, and while students suffer, Comcast was just awarded forty million in city and state tax payer dollars to build a second record-setting skyscraper in Center City, Philadelphia.

Instead of draining our resources, Comcast should use more of its profits to support services for the people of Philadelphia in need, including paying for the $400+ million deficit in the Philadelphia public school budget.

Comcast paid over $100,000 in lobbying fees to oppose a City Council bill that would have expanded access to paid sick days to hundreds of thousands of us and our neighbors. The ratio for CEO pay to average employee pay at Comcast is 370:1, and few Comcast workers have the benefits and protections afforded by membership in a union. Comcast should state its support for its workers’, and all workers’, rights to form unions, and support efforts to build dignity for workers at its own organization by not combating its workers or its subcontractors’ workers efforts to form unions at their workplaces. Don’t pass on the fee to us.

Comcast cable subscribers pay the franchise fee in tiny installments every month as a part of their cable bill. If Comcast agrees to pay its fair share, any extra/supplemental funds should come from their record profits, not from charging already struggling consumers more, or taking resources from important Philly services like public access TV.

If Comcast can’t meet our demands, the City should actively solicit other cable providers to partner with to serve our communities. The City is able to solicit other franchises at any time. If Comcast is not willing to engage in a productive dialogue about what Philly needs from its most profitable tenant, we should invite Google Fiber and other competitors to bid to compete with Comcast, or actively promote and pursue community-owned-and-operated telecommunications providers in our city.

Why fight for a fair franchise?

Comcast has outsized power in a Philadelphia still suffering under economic crisis. As a part of their last franchise, our City secured vital resources for public access TV and some resources for the City’s general fund. With this negotiation, we have the chance to ask: what is the responsibility of a massively profitable corporation in a city losing schools, jobs, and homes? This is the first step in a long negotiation process between our City and this hugely important corporate player. Let’s make sure the City knows we’re united for the communications services we all need, and for the resources our communities deserve.

Where are the results of Phila.’s Comcast survey?

The FCC Is Considering A Big Change To Lifeline — But What Is It, And How Does It Work?

Protests at Comcast part of brewing battle over net neutrality

‘Emergency’ protests sweep US to save internet from ‘hybrid’ net neutrality

Protests at Comcast part of brewing battle over net neutrality