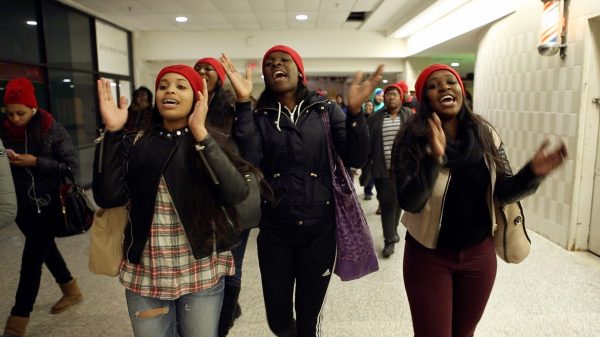 From Director, Milena Velis – “Groundwork is the story of a few of the many unsung heroes around us who give us real hope that we can create a better future. They are people who refuse to accept their circumstances of poverty, discrimination and marginalization. Groundwork is an exploration of the experience of fighting for justice and of how that experience transforms people. It’s about the process of change that you go through when you know your community has your back.

We produced Groundwork in order to make the practice of fighting for justice more transparent. Too many stories about social movements begin with the ending – we hear only about the culminating moments of victory or mass protest. Groundwork is about the beauty and power that’s in the beginning. We hope to not only inform but inspire, by making the nuts and bolts of building a movement accessible and visible.

Groundwork is also about regular people. Rather than putting leaders on a pedestal, this film shows their full humanity – their fears, their humor, their daily struggles, and the experiences that build their commitment. What makes a single mom risk her job? How does an eighth-grader become an organizer?

The process of producing Groundwork is a reflection of the organizing portrayed in the film. Each storyline was produced in deep collaboration with the organizations portrayed, by a collective of independent media makers of different backgrounds, many of whom have deep ties to the issues portrayed. This film was not created by any one person, rather, it is the product of many people working together, just like the movements portrayed in the film.”

Groundwork, produced in 2015, is a 40-minute film and series of 5 short documentaries that go in-depth with 5 local activists fighting for for their communities.

To watch the Groundwork feature contact us using the email link above.  The shorts are available below:

Eastwick in the Middle: Organizing for Environmental Justice

Community members in Eastwick, Southwest Philadelphia, organize for environmental justice and community control over development in a neighborhood plagued by decades of toxic dumping and forced displacement, and threatened by climate change. Eastwick Action Committee member, Earl Wilson, invites us into the work of the Eastwick Friends & Neighbors Coalition, a group of community, environmental, and legal advocates fighting to make Eastwick whole.

A Job I Can Enjoy

The first time Shymara Jones, a Popeye’s worker, went to a protest, she didn’t know where she was supposed to stand. The second time she went on strike, she brought 6 of her coworkers with her. As a leaders in the growing movement for $15 and a union for fast food workers, Shymara is making a way for her two-year-old son Jaden to have a better future. They’ve come a long way, but they know the movement won’t stop when they win the fight for $15.

When he was in eighth grade, Giancarlos Rodriguez led chants at a rally for the first time. Now he’s one of dozens of High School students in Philadelphia’s Kensington neighborhood who are fighting for good schools and control over their education. When the School District puts two beloved neighborhood schools on the list for closure, the community takes action to keep them open. Students take us into the work of Youth United for Change.

El Motor de Mi Vida / The Engine of My Life

Every day, Celia Mota’s only option is to drive without a license, risking deportation and separation from her family. When Celia’s brother-in-law was wrongfully arrested four years ago, she and her sister Alejandra found hope and faith with New Sanctuary Movement. After winning a multi-year court battle to keep their family together, they decided to fight for other people in their situation. Now they are leading a campaign for driver’s licenses for all Pennsylvanians, regardless of immigration status.

The Valley with a Heart

Over decades of working as nurses, Lori Schmidt and Elaine Weale have seen healthcare become a profit-driven, assembly-line industry. Every single day is a struggle to give the best care without enough staffing or supplies. When they joined the union, they were doing what their parents and grandparents taught them to do – standing up for what’s right. Drawing on family traditions and community pride, the Wyoming Valley Nurse’s Association is organizing for better patient care with nurses across Pennsylvania.